At work the other day, it came apparent to me, how sometimes the little things, the things we may take for granted, could mean the world to someone else.

In the simplicity of doing my job, I was helping a woman and her two children who were in a crisis situation.  Tragedy surrounds us in many forms.  From all the craziness happening in Asia, to everyday crimes and unfortunate circumstances in our backyards.

The situation was tragic, but too often found.  A young girl had been sexually assaulted, and her bravery and determination had brought her to report the crime.  The mother was a single mom of 3, struggling to survive in this downturned economy.  Hours upon hours in the interview rooms, the girls were tired and hungry, and emotionally distraught.

Did I mention they were also both being treated at sick kids hospital?

Sitting with these two gracious girls I was struck by the infamous question, why do bad things happen to good people?

Within the parameters of my employment I bought the girls dinner.  After doing so I recognized the all too familiar emotions from the Mother; fear (because she did not have the money to reimburse me, and did not know how she could repay me), embarrassment (that she did not have the money to pay me), relief (that her girls had been fed), and thankful that her girls would eat that night.

I quickly explained it was taken care of and a small gesture compared to the horrendous acts that had lead them to this point.  The girls were kind and polite, the Mother thankful for the gesture.  Such a small gesture, at a time where I can only imagine their world was turned upside down.  The girls were excited to eat out, the Mom had such a tired look in her eyes.

Work may be tough at times, but it is a constant reminder of how truly fortunate I am.  It constantly reminds me of my priorities and gratitude for my life and all that is in it.

I will ask you to do the same, and remember that sometimes the smallest of gestures can truly mean the world to someone. 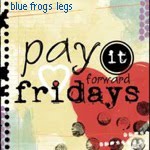 Have a great weekend everyone, and go out and PAY IT FORWARD, and don't forget to share your stories...
Posted by Kelly at 11:49 AM

Email ThisBlogThis!Share to TwitterShare to FacebookShare to Pinterest
Labels: Pay it Forward

Kelly, How fortunate you are to be have such "right livelihood". I say fortunate because you are there when someone is in need of these gestures you call small. I'm so sure you know they know how significant they are. The Universe has put you where you belong. See all these crises and suffering is hard to hold. It breaks the heart to sit within these pieces of life. The gratitude and compassion are limitless. Bless you.

Well said. So, so true. Thank you for this reminder.

For every tragic event that shows the worst of humanity, there is an angel who shows its best.

Someone close to me recently witnessed a road rage incident that ended with a savage beating before the coward responsible drove off; she was one of a few who stopped to help the victim until police and ambulance arrived. I am sure he will remember those who stopped; he probably didn't notice the many who drove by.

Kelly, those girls and their mother will not soon forget you.

Hi Kelly, Everything okay with you guys. You usually post much more often. I hope you are on a great holiday.

Great post! An eye opener of reality and the importance of reaching out to others. As well as maintaing an attitude of gratitude in our own lives. Keep up the good, looking forward to reading more. Grabbing your badge for my blog....My Meddling Mind.
Thanks!

As always, an inspiration. Thank you for this timely reminder :)

Your most very welcome :)

I have just learned that although life sometimes sucks, there are many in worse positions. And after grasping the truth of that, life just doesn't seem to suck as much as we previously thought, LOL!!! I have also learned the priorities in my life - mainly, the Peanut, and the rest is just icing on the cake!

Holiday - I wish!!!
Thanks for thinking of us, Paula Devi, no sadly just copiously busy and internet acting up...

Very kind words, Legacy. I am truly aghast at the horrors of humanity out there... but at the same time I have seen and received the above mentioned angelness :) I only have to emulate what has been bestowed upon me.

Your welcome, I often have to remind myself how important the little things are...

YOu are right, I am extremely fortunate, in so many ways. Sometimes in writing these down, it reinforces that I AM in the right place. You are so very wise :)

Thank you Cassi. A reminder to myself as much as to others. We are all just people of the world, just trying to get by :) On good days it's nice to give a little, on bad days, it sure feels good to get that little something :)